If there is one thing that moving five times in four years taught me, it’s that I have way too much stuff.

And still do.  The second garage of the house we have rented the last four years is still packed with boxes, many of which haven’t seen daylight since the move.  To be fair, some of those boxes are family artifacts, the retained keepsakes of five generation’s memories. Sure, I haven’t recently used the lunchbox-sized salesman sample from the 1920’s DeCamp Consolidated Glass Casket Company, but I can’t see putting that up on eBay.  But a lot of it is crap that I don’t need in my life.  And we’ve slowly been getting rid of it.  We need to do more.

Books are one example.  I love books and still have the first “real” book I ever read. When we moved from North Carolina to California, we had in the neighborhood of 40 boxes of books and continued to buy new ones.  Bookcases were one of the few exceptions to our “no new furniture for a rental house” rule.   Times change.  Over the last few years we’ve been purging the books, pushing them on friends (fair warning if you come visit) and donating them to the local library.  Might even have tossed a few, which is right up there with flag burning in terms of moral depravity.

The challenge is that there are some books I’d like to keep, but I really don’t want to have the physical book.  Fortunately, digitalization is the foundation of the new minimalism. Virtual items don’t clutter the living room.  So as physical books have gone out, new books have come in in digital format.   I’m not alone–just ask the former book store chain Borders.  Every wonder why Kindle editions cost only slightly less than physical books, even though the marginal cost of manufacturing and distributing them is near zero? People want them.

In the DeCamp household, the latest target of the new minimalism is our movie collection. For many years, watching DVDs was one of our favorite entertainments and we collected hundreds of DVDs of movies and our favorite TV series.  Today, we’re more likely to watch a streaming service or purchase a digital version that lives in a cloud somewhere, but we do still frequently dip into our DVD library.  A couple of years ago we got organized, purging some and putting the rest into plastic envelops that reduced the physical size of storing them to six trays that sit on a bookshelf.   That helped to reduce the clutter.   Now those trays are falling apart and I’d like to reduce the footprint further.

This brings me to the point of the post (yes, there is a point):  DVD ripping.

Over the last year or two, this has become practical.  The first enabler has been the drop in the cost of storage.  A name brand external two TB USB drive is around $100 and should hold the entire movie collection.

The second enabler is DVD Decrypter.  A free program for Windows, Mac, and Linux, DVD Decrypter does an excellent job of bypassing the various digital rights management locks on DVDs so you can make a digital copy.  Although the legal implications are murky, ripping personal DVDs for personal use is low risk.  It takes about 15-20  minutes per disc (constraint is read-speed for the drive), so I just keep feeding them in while I’m doing something else on the computer.

DVD Decrypter makes an exact copy of the source MPEG-2 format, which means that the typical movie rip consumes about seven GB.  This is pretty large and the quality is already a compromise, having been compressed down from the original very high definition analog movie.  By using the third enabler, Handbrake, we can convert the format to MPEG-4 (H.264 encoder), which takes up much less space (about one to three GB) with about the same quality and is supported by more devices.  The default settings for Handbrake work well, with some minor tweaks.  One was to increase the video quality setting RF to 19 from the default of 20.  Another was to add a second audio track to pass through the original AC3 surround sound audio.  By default Handbrake mixes down the audio to Dolby Pro Logic II.  The second audio track increases the size of the file but retains more of the source surround sound encoding for future developments in audio playback.  We end up with an .MP4 video container file.  One of the particularly nice features is that Handbrake has a command line and a batch mode processing, so doing high-volume conversions is a little easier.  It’s the type of thing you kick-off and run over-night, even with a fast, multi-core computer.  (May 2014 update:  I’ve upgraded from a 6 year old workstation to a new I7 quad core/dual threaded machine.  What used to take 90-120 minutes to encode now runs in under 10 minutes.  Thanks, Gordon Moore.)

The fourth enabler is VLC, another free program for Windows, Mac, Linux, and iOS device that will play just about any video format.  It does a wonderful job of playing the movies.  You probably already have this installed.

The final enabler is Serviio, a free program for Windows, Mac, and Linux that acts as a media streamer, serving up audio, pictures, and video via Universal Plug and Play (UPnP) protocol.  It will even act as an RSS redirector.  A lightweight utility, it runs in the background and makes it easy to browse and watch videos on a laptop, iDevice, or the TV via Linda’s PS3.  All three support UPnP.  I’ve found the clients to be more stable when you disable some of the “smart” features, such as trying to download meta-data about the media files you are serving.  There are other popular media servers out there.  I also experimented with Plex on a Windows platform (also available on Linux).  I found it to be unstable and Googlish in that it wants to suck up your local media/meta data/usage information as a trade off for a fancier experience, something I don’t care about.  XBMC is also popular, but I don’t have any personal experience with it.

May 2014  update:  I’ve spent the last several weeks working my way through our DVD and public domain collection and have a few lessons learned.

I originally misunderstood some of the documentation in the Handbrake guide and had been creating MVK (Matroska) container files.  These play fine on the computers and iDevices.  But I discovered that the PS3 doesn’t like this format.  Unfortunately, I discovered this after having gotten up to the “Ts” and creating more than 1,500 video files.  There was no way I was going to rip and reconvert all of those discs again.  Running them back through Handbrake was an option, but it had the disadvantages of re-encoding, causing loss of quality, extended processing times and the occasional glitches with copying the dual audio tracks.  Both MKV and MP4 are container files, so all that is really needed is to recode or remux the existing video and audio streams into the new container.

XMedia Recode is a wonderful program for recoding video container files and has an easy to use batch mode.  Just make sure on both the video and audio tabs that you select “copy” rather than “convert.”  Each remux only takes a few minutes per file.  Now the PS3 is happy as well.

I also have a handful of Blu-ray discs.  DVD Decrypter doesn’t read Blu-ray, so I needed a different tool.

MakeMKV is free beta software that rips Blu-ray discs, similar to DVD Decrypter.  I’ve then been using Handbrake to convert to MP4 and resize the resolution from the native 1080p to 720p to reduce the size on disc.

That’s what it takes for the new minimalism.  Getting rid of stuff is hard work. 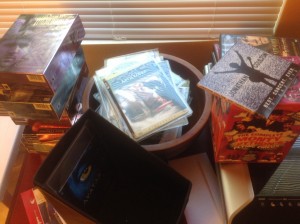 Almost through the As….