2018 is a year of transition, splitting time between the boat in Oxnard, California; Chris, Quinn, and Kate in Moore, Oklahoma; and travel.

In March, we had a chance to travel to New Zealand and spent 14 days touring the South island on motorcycles with Tandy and friends. Tandy had been there several times before and laid out a wonderful series of routes that took us in a lazy figure-8 around the island. 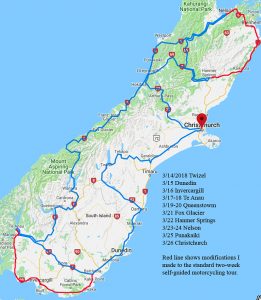 It will be later this year (after the PCT, below) before I get a chance to process the pictures, but Tandy has written a blog post that covers the highlights and has the best of all of our pictures.

Another highlight is a hike of a couple sections of the Pacific Crest Trail, a National Scenic Trail that winds from the Mexican border near Campo, CA to the Canadian boarder near Manning Provincial Park, BC.  It covers approximately 2,650 miles through some of the most beautiful landscapes in the world, including the Sierra Nevada and Cascade mountains.  A thru-hike of the PCT has been a dream of mine for many years, but I’ll have to settle for a few sections this year. I have a start permit for April 26 and will try to occasionally post an update.

While hiking, I’ll be carrying a SPOT GPS tracking device which will upload an “I’m done for the day” message and GPS location each night.  If you don’t see an update for a few days, don’t panic.  It probably means the batteries are dead, I’m in a canyon, or I just forgot to press the “OK” button after a long day of hiking.

This entry was posted in Family, Travel. Bookmark the permalink.