I have a 2005 Honda Goldwing motorcycle.

Actually, I had a 2005 Goldwing.  I recently came across this blog fragment I started writing in 2013.  Evidently, Honda had just released the 2014 Goldwing and it was enough to send me on this rant.  I don’t know where I was going with it, or what the title means, but I don’t see anything below that I don’t still agree with.  When I downsized in 2017, I kept the ’99 Ducati ST4 and sold the Goldwing.  I rode the Ducati over 12,000 miles through 19 states that summer, and was very happy with the choice.

Honda finally did do a complete redesign of the Goldwing for the 2018 model year.  Unfortunately, mother Honda took the bike in a strange direction, at least from the perspective of someone who likes to ride long distances on a bike that handles well, often with a passenger.  I’m hard pressed to find one design change that makes the bike better for sport-touring.  Oh well.  I’m happy with the lightly used BMW K1600GTL I picked up in 2018.  I still get a huge smile every time I open the throttle and a trip to Tennessee is a short ride.  We’ll have to wait and see what the 2035 Goldwing looks like. 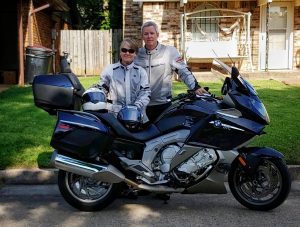 The only problem with the Honda Goldwing, GL1800 era, is that it was designed for a narrow target audience.  For that audience, which values comfortable, long-distance two-up touring, it’s a wonderful bike that more than satisfies.  And indeed, this is one of the reasons I have one.

You get a good sense of the target demographic by frequenting the various Goldwing forums on the Internet, such as GLriders.  You might find an advertisement for a Goldwing in the AARP magazine but probably not in Outside or Wired.

It’s shame, for Honda fans, to see the rest of the market continue to advance while the Goldwing does not.  Beneath the restyled plastic of the latest “new” Goldwing is a platform and set of technology that was designed in the mid-90s.   But in the last 20 years, motorcycle technology has advanced greatly.  For example, I also have a 1999 Ducati ST4.  This is a bike that, like the Goldwing, is also based on mid-90’s technology, in this case the Ducati 916 superbike that won multiple championships.  Comparing this bike to the current, state of the art (but still under $20K) BMW consumer sportbike shows just how dramatic the change has been for every component.  Almost twice the horsepower.  Computer controlled suspension, traction, power delivery, ABS.  Configurable digital instrumentation.  Slipper clutch.  Throttle by wire.  Brakes so powerful a single finger can generate stopping forces over 1 G.  All with a service interval that is three times longer than that of the Ducati.

Meanwhile, the 2014 Goldwing is basically the same bike sketched on the Honda whiteboard in 1997, and even then it was trailing edge technology.  The front suspension is a single, old-style, non-adjustable gas strut (the other fork tube is just a guide) with a primitive anti-dive system that hydraulically locks the suspension when the brakes are applied.  (Basically, you have no front suspension when the brakes are on.)  The brakes themselves are linked and underpowered for stopping a bike that weighs close to 1,000 pounds wet, not including the rider and pillion (and their farkles, traveling luggage and/or trailer).  The radio controls dominate the handle-bar, tank, and dash display, but heaven forbid you want to plug in heated clothing or a GPS.

This entry was posted in Motorcycles and tagged Motorcycles, Opinion. Bookmark the permalink.

One Response to Metered Enthusiasm